heres some updates with what ive been up to. none of it is done, but some things are closer than others. hopefully ill have a chance to put up some finishes soon! 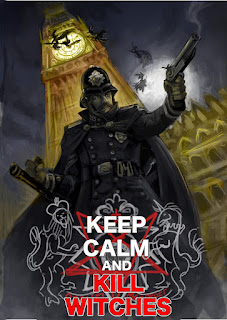 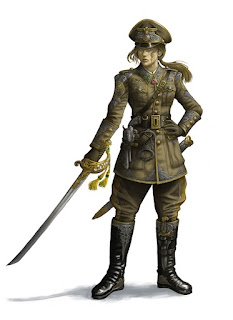 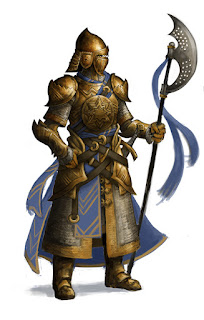 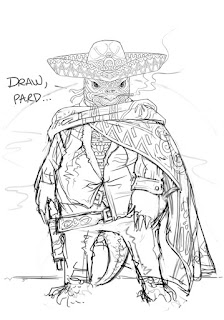 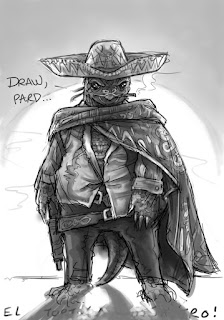 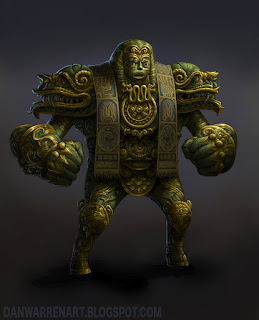 Posted by Daniel Warren at 12:14 AM No comments:

We cover a lot of issues in the discussions on my stream, ranging all sorts of topics in the current world of professional art. Over time, a few of these issues have popped up repeatedly, and have resulted in an increased level of reaction. The new result Ive decided on is here in the form of catalogued rants- of which this is the second. Not long ago we had a barrage of questions on the tracing issue, and im happy to say most of that has been put to rest. The next topic id like to lay out is the repeatedly brought up question of division in the art world and the strange politics it has created within groups of artists everywhere.

So, what is this division? Specifically, it's the branching tree of artistic fields one can get into, and the idea that somehow they are different from one another in any tangible way. Illustration, Concept Art, Fine Art, Painting, and Graphic Design have all increasingly become isolated communities, with minimal crossover. Time and time again im contacted and asked which field is 'better' than the other, which field an individual would be best at, and which field is the most lucrative to pursue-  all questions with one unified response: the lines you've broken professional art into are invisible, and, like the boogeyman, only exist if you believe in them.

As we start to break this down, I'm reminded of a line from James Gurney, I believe from the introduction of Imaginative Realism, that says 'There is no high or low art, there is only art', and I could not agree more. Increasingly over the last century, the world of professional art has been split into just that- professions- which, over time, have come to define themselves as jobs requiring a set of compressed and specific skills that separate the people using them from other artists doing other things. You can see this split easiest on the educational level of the art world, where Majors available to students have a wide range of titles- each with their own required courses and materials except for on the fundamental level. In this divided environment, all kinds of strange problems can arise- some of which ive had the displeasure of experiencing myself during my own time served in art school. The end result is a series of bubble environments that groups of otherwise likeminded people are split between, each with their own misguided blanket statements about what they can and cannot do based on what they've been told is and is not how things work. Ive had to endure many of these back in school, and im still seeing them pop up today. Phrases like 'Photoshop is mainly for graphic designers' or 'Of course I don't design letters, Im an Illustrator after all'. It's one of those recurring cases where a basic knowledge of art history can help smooth things over and get people back on track- so without any more hesitation, lets break down where we are today to what it all came from, and hopefully realize that everything were all doing basically boils down to minor professional inflections on the same visual accent.

Below im going to show, in descending chronological order, the jobs available through time as a professional visual artist. At the top is the modern world today, and at the bottom is the Renaissance and the dark age world before it. 'Fine art' will be exempt from the list, because what is and is not 'fine art' changes age to age. The constant which i will list in its place is 'painting', which can mean anything from the work of the renaissance masters to any and all of the the changing gallery trends of the ages since them.

*(though the term 'graphic design' did not exist, there was a booming art in letterform design, patterning, and the arrangement of book design between the renaissance and the 1700s which would fuel the birth of future graphic designers such as william morris and alphonse much. Jobs were not available, but the art was being performed nonetheless.

When viewing the chart above, its easy to see at first glance that since the renaissance the field of professional art has certainly expanded. Whats harder to understand, however, is that much of what has come since is merely a matter of titles instead of substance- and that in many cases, one thing is in fact very much alike, if not the same as, the other. What do I mean by this? Ill try to explain bellow with one example which encompasses the entire point, best represented through a man who is considered by many to be the creator and model of the current professional world we live in: Alphonse Mucha.

Before Mucha's time (1860-1939), the terms 'Illustrator', 'Graphic Designer' and 'Concept artist' did not exist. They were, as jobs,  present in the world nonetheless, but all fell under one shared title: Painter. As one such painter, Mucha excelled in one specific area which propelled his career forward, defining all that would come after it- Design. Famous for his ability to wrap text, pages, walls, figures, and sculpture in unique and elaborate patterns and shapes, Mucha was directly responsible for the emergence of corporate identity in the 1800s. He was hired, in no simpler terms, to brand a companies products with a distinct and unique look and title that would catch the eyes of consumers wherever they were shelved. Whats more, thanks to then groundbreaking advances is print and photography, Mucha was able to incorporate images with the text- often of his signature female characters embodying a vast array of themes and products. At the height of his career, Muchas work and influence was present in the entire western world- no small accomplishment once one considers that at this point in history almost all of the east was closed off. But this was only the beginning of his contributions to today's model of professional art. Because categories for artists did not yet exist in Mucha's world, he was seamlessly involved in a number of now separated industries. He was a book illustrator of much merit, as exemplified in his illustrations for Le Pater, he was a painter and muralist of incredible skill as seen in his massive works for The Slav Epic, and he was an accomplished prop, costume, and poster designer for a number of plays and operas- indirectly furthering the pre-production and advertising ends of an industry that would one day come to be called 'Concept Art'. By the time of his death in 1939, Mucha had laid the foundations of nearly every field of work available for professional visual artists in the modern world, and had lived to see his explorations into corporate branding and book illustration thrive in illustrations 'Golden Age'.

So what does this mean? Quite simply, that our fragmented and divided view of what visual artists can do, the paths they can choose to take, and the fields that they may let define them, were all once one and the same- with a common denominator in the representative arts that have always been their ever present backbone. As we've grown more practiced and sophisticated in what we do, naturally some have excelled in certain areas, expanding and defining them further and further. This has caused what was once a unified field to slowly split apart into specialty factions, where some artists focus on only A and B, while some only deal with C or D. We forget that there was a time, not long ago, when only one person was expected to do all the things listed above, and to do them very well. This has led to a strange switch being flipped in the modern artistic climate, where artists are constantly looking ahead and not back, striving to find some undiscovered niche  and unconquered corner of design and statement where they can set up shop and thrive in their self defined 'next big thing'. Its a somewhat new idea, only having been around for the past 70 years or so, where more meaning is placed on art that is unique, brave, and 'new' rather than well versed, grounded, and skilled. where for over 500 years of art, the masters we all fall back on were constantly looking to their predecessors to master and perfect upon, now students are encouraged to look forward toward something that doesn't yet exist, to find some of the few remaining unsaid statements and styles, and to let those lucky finds define them. Its the difference between an artist in the 1930s, (who, well versed in fundamental design and having strong foundation in the 500 years of painting and draftsmanship before him, could take on any job from a book cover to a poster to a stage design to a pamphlet to a newspaper ad to a blueprint for a buildings entryway) and an artist in the modern world (who is very good at using the program or medium he was told to use in school, but if you need anything else you'll have to check the looking for work forums because he's only ever done this one thing and doesn't see the merit / point in doing the others since he paid good money for his degree so what he got out of it should be enough for you).

We all can, and should, be open to doing everything and anything with our work. Every divided field in existence today was once part of something unified and greater, and as such, each can inform and improve the others. Some of the biggest names in what we all do today are hybrid examples of two or even sometimes three of these fields, and people wonder how their illustrations achieve such graphic elements, or how their designs could be so evocative and illustrative within their set parameters. Lets all stop limiting ourselves to the title of what it is we are supposed to be doing. None of these fields are better than the other, and for narrowing ourselves down to any one's accepted set structure we are all actually worse in the end. Lets stop looking down on other types of artists to make ourselves feel better, and instead realize that were all being huge idiots by categorizing these things in the first place.

See you all next time.

well im back from a short break. didnt want to take one, but my monitor was in the shop again for backlight issues. i took the time to do some pencilling and try to organize what i need to finish for my portfolio. below is some random stuff ive been working on lately. 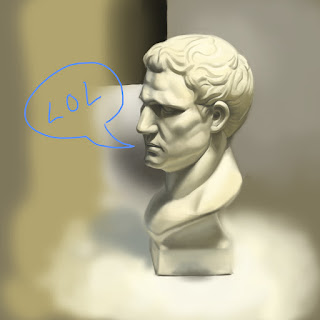 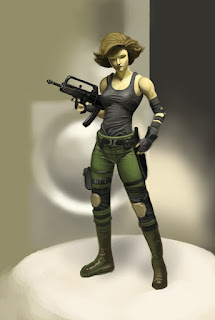 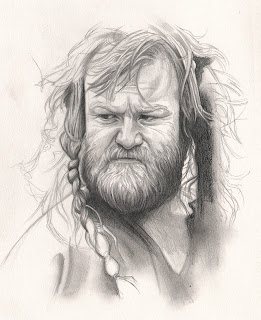 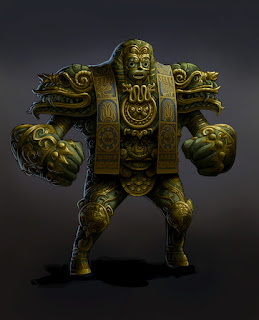 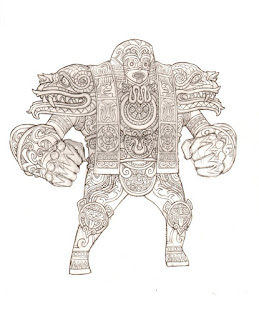